Swimming with the tide: As out-of-town buyers wade into Denver’s luxury market, pools are liquid gold 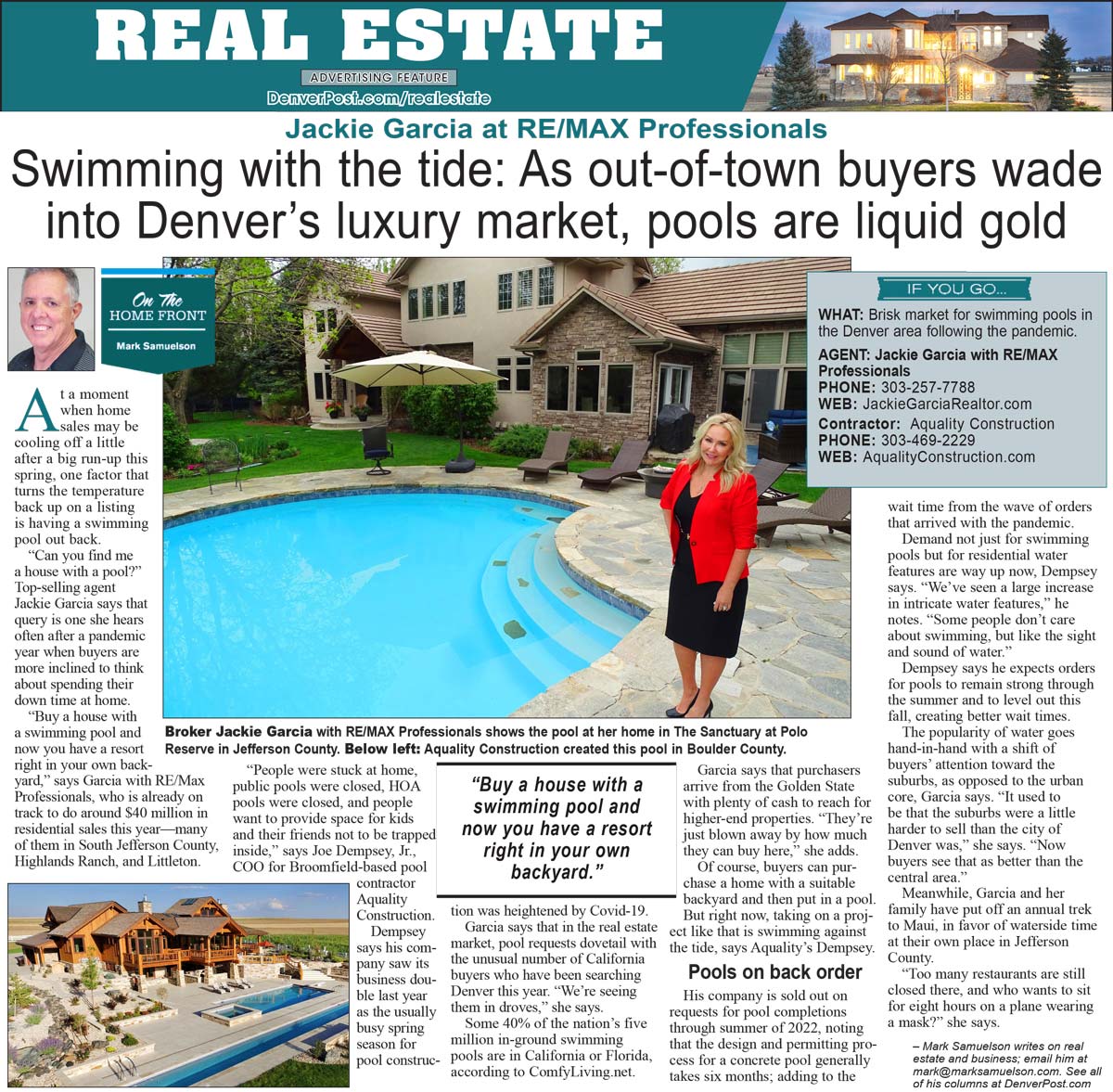 At a moment when home sales may be cooling off a little after a big run-up this spring, one factor that turns the temperature back up on a listing is having a swimming pool out back.

“Can you find me a house with a pool?” Top-selling agent Jackie Garcia says that query is one she hears often after a pandemic year when buyers are more inclined to think about spending their down time at home.

...says Garcia with RE/Max Professionals, who is already on track to do around $40 million in residential sales this year—many of them in South Jefferson County, Highlands Ranch, and Littleton.

“People were stuck at home, public pools were closed, HOA pools were closed, and people want to provide space for kids and their friends not to be trapped inside,” says Joe Dempsey, Jr., COO for Broomfield-based pool contractor Aquality Construction.

Dempsey says his company saw its business double last year as the usually busy spring season for pool construction was heightened by Covid-19. Garcia says that in the real estate market, pool requests dovetail with the unusual number of California buyers who have been searching Denver this year. “We’re seeing them in droves,” she says.

Some 40% of the nation’s five million in-ground swimming pools are in California or Florida, according to ComfyLiving.net.

Garcia says that purchasers arrive from the Golden State with plenty of cash to reach for higher-end properties. “They’re just blown away by how much they can buy here,” she adds. Of course, buyers can purchase a home with a suitable backyard and then put in a pool. But right now, taking on a project like that is swimming against the tide, says Aquality’s Dempsey.

Pools on back order

His company is sold out on requests for pool completions through summer of 2022, noting that the design and permitting pro- cess for a concrete pool generally takes six months; adding to the wait time from the wave of orders that arrived with the pandemic.

Demand not just for swimming pools but for residential water features are way up now, Dempsey says. “We’ve seen a large increase in intricate water features,” he notes. “Some people don’t care about swimming, but like the sight and sound of water.”

Dempsey says he expects orders for pools to remain strong through the summer and to level out this fall, creating better wait times.

The popularity of water goes hand-in-hand with a shift of buyers’ attention toward the suburbs, as opposed to the urban core, Garcia says. “It used to be that the suburbs were a little harder to sell than the city of Denver was,” she says. “Now buyers see that as better than the central area.”

Meanwhile, Garcia and her family have put off an annual trek to Maui, in favor of waterside time at their own place in Jefferson County. “Too many restaurants are still closed there, and who wants to sit for eight hours on a plane wearing a mask?” she says.

Our Code of Ethics
Testimonials
Videos
Press
FAQ and Tips